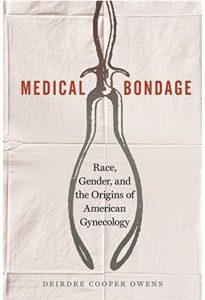 Medical Bondage: Race, Gender and the Origins of American Gynecology

In Medical Bondage: Race, Gender and the Origins of American Gynecology, Deirdre Cooper-Owens casts disturbing new light on the birth of the gynecological field. Using a wide variety of documents, oral narratives, and other elements of the historical record, Cooper-Owens tells the fascinating story of how enslaved African American women and Irish immigrants contributed to our modern gynecological understanding, both as trained practitioners and as experimental patients.

Why might a slaveholder consent to gynecological treatment for his slaves? Particularly after the ban of the transatlantic slave trade, the perpetuation of the slave economy was dependent in large part upon the reproductive capacities of slaves, voluntarily or otherwise. A female slave who could not bear children, Cooper-Owens explains, was exponentially less valuable, and so slaveholders embraced gynecological care as being in their own self-interest.

A considerable portion of the book draws on the experiences of enslaved African Americans. Cooper-Owens sketches out a variety of cases which illustrate the evolution of the gynecological field. In so doing, she exposes the hypocrisy of a system which espoused the sub-humanity of the experimental subjects while subconsciously acknowledging the fundamental truth which would have undercut the institution of slavery itself: that African Americans were experimented upon meant that they must be anatomically equivalent to white women, with no meaningful distinctions between them.

Irish-American immigrants are discussed in the context of their reliance on prostitution and consequent gynecologic ailments, particularly sexually transmitted infections. These conditions made them a readily available experimental patient population.

The experiences of both groups raise important questions regarding informed consent (or lack thereof) and cast new light on enduring debates in the areas of bodily autonomy and research ethics. Readers will come away with ample material for discussion. Medical Bondage breaks important new ground in its subfield, and may well shape the conversation for years to come.